Herman Boerhaave is born on December 31 in 1668 in Voorhout, a small village nearby Leiden, where his father is a clergyman. As usual in those days, his father teaches him Dutch, ancient Greek and Latin, History and scriptual knowledge. In 1682 he goes to the school of Latin, the grammar school, in Leiden and in 1684 he matriculates as a student in theology into Leiden University. In December 1690 Boerhaave graduates as a doctor of Philosophy.

When making stock of the inventory of the library of the university he comes in contact with the topic of his real interest: Medicine. In 1693 he graduates as a doctor in Medicine in Harderwijk. 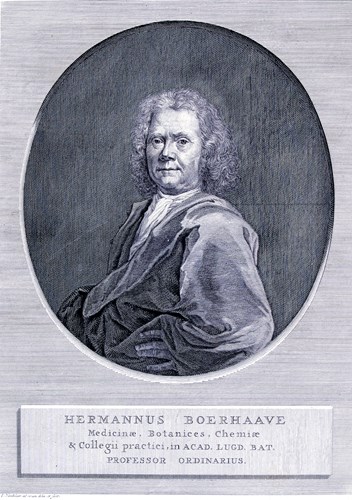 A discussion with an unknown person about Spinoza, in which he does not distances himself from Spinoza's doctrine,  has far reaching consequences for Boerhaave. He is wrongly supected of being an atheist and so he can no longer depend on a nomination as a clergyman. By a resolution of june 1678 the Board of trustees has stated that somebody who stands up for Spinoza is unfitted for incumbent.

So he takes up a permanent residency as a physician  in Leiden, where he has the opportunity to orientate himself in the field of natural sciences.

In 1701 he is appointed lector of Medicine at Leiden University, but for the time to come there is no possibility for a nomination as a professor. In 1703 a professorship is offered to Boerhaave by the Groningen University. But he does not agree. This gesture is so highly appreciated by the Board of Trustees of Leiden University that he is promised the first coming professorship. Nevertheless it will last up to 1709 before is nominated as professor in Botany

In 1714 he succeeds Gotfried Bidloo as professor in practical Medicine in the Caecilia Hospital. Both his orations and his lectures fit to daily practice are impressive.

Boerhaave follows the tradition of Hippocrates, adhering the principle that Nature is well equipped to fight against disease and that the physician is helping this process. From the theoritcal point of view Boerhaave is an advocate of the mechanical doctrine. He uses the developments in Anatomy and Physiology as much as possible but his rule is that all theory has to be proved in practice. And the best place to do this is at the patients bedside. His goal is to diagnose a disease as precise as possible.

Besides the work for the University and his practice as Physician, growing because of his increasing famouw reputation,Boerhaave has many other activities: A lot of corresponce with his friends, writing the textbooks "Intitutiones medicae" and "Aphorismi", composing a catalogue for the Leiden Botanical Garden, preparing his lectures, taking care of the scientific inheritance of Jan Swammerdam and the development of his ideas about chemistry published in 1732 in his book "Elementa Chemicae".

Students from all countries over the world come to Leiden to study with Boerhaave. In his last year of teaching 60 out of 97 students are from abroad.

One can understand that the pupils of Boerhaave try to follow to example of their master. Clinical teaching in various countries of Europe is totally reformed according to the model of Boerhaave.

In 1770, 30 years after Boerhaave died, Frederik The Great shall order that the medical professors of Berlin have to tick to the methodology of Boerhaave.

Teacher of all Europe

In 1729 Boerhaave asks the Board of Trustees to relief him of his lectures in Botany and Chemistry because health problems, obstinate gout. Next year he turns over the management of the Botanical Garden to his successor. In 1731 he has to stop his lectures for half a year. After this period he continues to present his lectures in Medicine with increasing difficulty up to and including 1737.

At September 23 1738 Herman Boerhaave dies, the man characterized as the teacher of  all Europe. 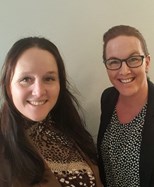